They say in order to write well, it is necessary to read.  I want to write the Gothic, so I must re, or re-read, novels within that genre. And maybe one or two not in the genre, ie ghost stories, I clearly understand what is not the Gothic. A general definition of Gothic is: relating to the Goths, the East Germanic branch of the Indo-European language family – C4th – C6th AD, together with architecture prevalent in West Europe C12th-C16th AD, including rib vaults, flying buttresses, large windows with elaborate traceries.

All very well, but what about the Gothic genre in English literature? I’ve learnt that the Gothic rage in England began in the early 1790s and reached its peak with a flood of imitations following Ann Radcliffe’s Mysteries of Udolpho in 1974. A classic beginning to a Gothic novel is held to be a ruin with lofty battlements wreathe with ivy and offering shelter to bird of prey.

At least that’s an abbey!  I need to make a list.

Let’s start with The Castle of Otranto by Hugh Walpole published in 1764. It begins: ‘Manfred, Prince of Otranto, had one son and one daughter: the latter, a most beautiful virgin, aged eighteen, was called Matilda.’  No architecture, but already we have a sliver of sex, with the implication that, as she’s a virgin to begin with, she won’t be for long.

Jump 100 years and we have Wuthering Heights by Emily Bronte, first published in 1874. The opening line is: ‘1801 – I have just returned from a visit to my landlord ­­- the solitary neighbour that I shall be troubled with.’ Again no architecture but a sense of foreboding in the language and two characters, apparently in opposition. Better.

Finally a modern novel, The Essex Serpent by Sarah Perry, published in 2016. It opens: ‘A young man walks down by the banks of the Blackwater under the full cold moon.’ No abbey, but another gothic element, water, plus the atmospheric cold moon.

My favourite by a long way is Shirley Jackson’s novel. We Have Always Lived in the Castle begins,

‘My name is Mary Katherine Blackwood. I am eighteen years old, and I live with my sister Constance. I have often thought that with any luck at all I could have been born a werewolf, because the two middle fingers on both my hands are the same length, but I have had to be content with what I had. I dislike washing myself, and dogs, and noise. I like my sister Constance, and Richard Plantagenet, and Amanita phalloides, the death-cap mushroom. Everyone else in my family is dead.’

Not quite they aren’t and thereby hangs the tale. I leave you to underline the Gothic icons in the above paragraph.  The second paragraph concentrates on setting – in great detail. 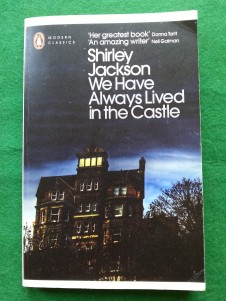 Enough to be going on with for now. Any additions to the list? Or discuss the definition of Gothic writing? Please use the ‘comment’ box.

4 thoughts on “Reading the Gothic”