Well, I’m not doing a graph – yet. So far I’ve made cards for each scene I have print-outs for, which take me to the end of the first draft of the novel, but I’ve at least two new scenes to write. See featured image at the top of this blog.

The first page gives:  The date of the action of the novel and the years covered by the back story;  the characters’ names and their relationship with other characters, divided into two groups, one for each family unit and where these two families live; the names of the two narrators and a one paragraph synopsis for each of them;  the theme of the novel; a line about the self-conscious narrator and the expected number of words in the novel.

I have then begun a chapter by chapter outline, quoting the first and last lines of each chapter. I don’t intend to include those quotes in my final submitted outline, but reading words which I’ve written takes me exactly to where I am in the story and what is in that chapter. The last line is the link with the next chapter and must indicate where the narrative is moving towards and must be of exactly right words.

I’m using three voices: the child Janet, her Uncle Ted and the adult Janet. I plan to use the self-conscious voice of the adult Janet to provide a link between the scenes and a link with today. 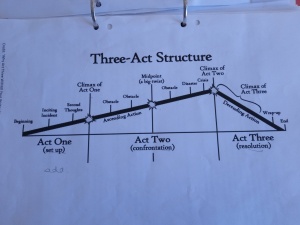 In this first stage of the novel (up to the climax of Act 1- see diagram) I’m using an alternative narrative between Janet’s scenes and Ted’s scenes. I’m not sure whether that pattern will fit as the story moves on, but I’ll find out, won’t I?

In the meantime, I’ve only reached Chapter 5 so have better GET ON WITH IT!